Once again, Seattle is cool and somewhat damp this weekend, while just about everywhere else in the U.S. folks are sweltering in humidity, heat, and triple-digit tempeatures. In some parts of the U.S. there are power outages due storms. I hope it gets better soon for everyone, and that when you read this you are safe, along with your loved ones and neighbors.

I’m now realizing that I sometimes live in a bit of a bubble here in the Seattle suburbs. Posting a brownie recipe was probably a bit offbeat for anyone in about 25 states across the U.S, at least for this week. It’s just that I was enjoying them so much I had to share the recipe. So if you’re in the heat, save the brownie recipe for later, or do what I do in the summer – bake at night or in the early morning, in a toaster oven if possible.

Instead, while taking a break to quickly cruise around Pinterest, I spotted these firecracker ice pops from the folks at Martha Stewart and I was instantly inspired. These are so versatile and simple to make. I stayed with strawberries for the red, and blueberries for the blue, but for the white I played around a bit. I started with greek yogurt (dripped yogurt) with raw honey, then I tried them with vanilla honey ice cream, and finally with some whipped cream and maple syrup as the sweetener. Alternatively, to make this dairy-free, you can use whipped coconut cream, cashew cream, or leave the white out and just go for red and blue pops. I think these pops will stand up to anything. I used my trusty old plastic Tovolo pop molds, but you can use paper cups and pop sticks, or any other kind of mold. You can even put these in glasses or glass jars to make them scoopable. I used dripped (greek-style) yogurt, but you can use any yogurt you have around. These are good to prepare a day before you'll want to eat them, or about 3 hours ahead of time.
Servings: 8 pops
Calories: 99kcal 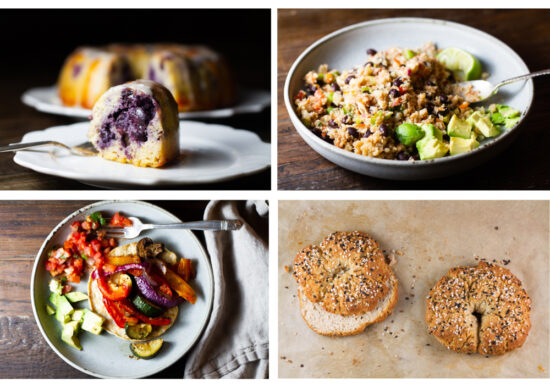