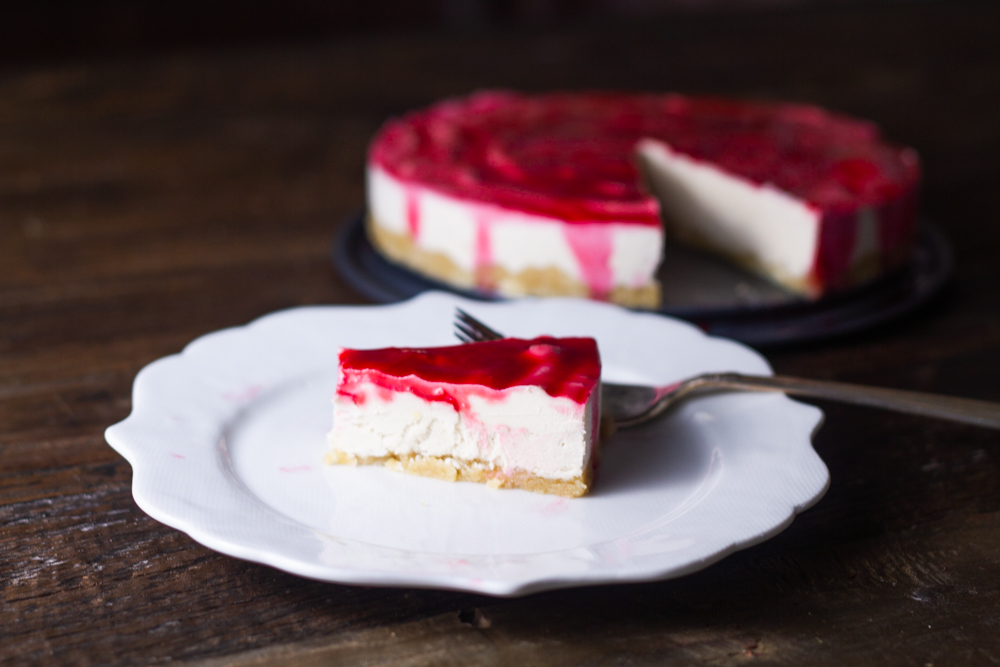 On a whim I created this version of my New York Style Raw Cheesecake and covered it in a raspberry glaze. This is an early run recipe, so you may have other techniques for accomplishing what I’m presenting to you here and I may have further discoveries later on. I’m pretty happy with the results so far, but open to all your wonderful suggestions!

The first time I made it, I swirled the raspberry glaze on top of the cheesecake batter with a toothpick and then froze it. It tasted great but didn’t look as dramatic as the second version you see in the pictures, where I poured the glaze over the frozen cake. Both work, so up to you. Because the top of the cheesecake almost looks like a rose once it’s frozen, pouring the raspberry glaze on top makes it look a bit like a rose. I know, sappy. Just in time for Valentine’s Day.

I celebrate love as often as possible, and I use the word “love” frequently, which I’ve come to accept as one of my vocabulary building blocks. I recently discovered a poet, Nikki Giovanni, and today I share with you “I Wrote a Good Omelet” to celebrate the full-hearted, light-headed feeling of love.

I Wrote a Good Omelet I use Meyer lemons for this cake when they're in season. They're slightly less acidic than regular lemons. I use a 7-inch springform pan to bake this cheesecake, but you can use a smaller pan or go to an 8-inch (which will yield a flatter cake).
Servings: 10 slices
Calories: 280kcal